Nicholas Hobbs studied Creative Design at Loughborough University, graduating in 1980. The course was heavily influenced by the teachings of the Arts & Crafts movement, particularly of Ernest Gimson and the Barnsley brothers, Sidney and Ernest. Peter Waals and, more latterly, Edward Barnsley directed the courses.

Following graduation, Nicholas remained at the University working on research at the Institute for Consumer Ergonomics. A broad range of project work was undertaken with various user groups looking into seating comfort, lawnmower design, London Underground ticket barriers, kitchen and kettle designs. This broad research heavily influences his approach to the design of furniture – including his oft stated belief of real and perceived comfort.

His business was established in 1993. One man, one pair of hands, designing and making furniture to commission. A limited resource, but over the years, a body of work has been (and is being) produced that will withstand the test of daily use and the test of time.

Nicholas Hobbs’ work featured in the ‘Celebrating Boxes’ touring exhibition and book of the same name. He has exhibited widely and sold through the Harley Gallery, Artizana and Ferrers Gallery. He now concentrates solely on commissioned/bespoke work. In particular, more recently he has worked on a number of ecclesiastical commissions.

His signature blanket chest was commissioned by Leicester City Museums in 2008 for display in the Ernest Gimson Exhibition. It is now in their permanent Arts & Crafts collection.

Nicholas Hobbs blends a strong architectural design style with the exacting construction standards of the Arts & Crafts tradition. This, combined with ergonomic design principles and close attention to detail, ensures that each piece of furniture is good to look at, built to last, and a pleasure to use. 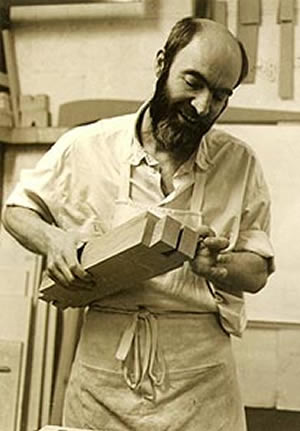